Three pastors' wives from the Florida Hospital Seventh-day Adventist church in Orlando decided they were tired of having their latest household fiasco show up in sermon illustrations, so these women made a parody video to get their point across, revamping Carrie Underwood's popular "Before He Cheats" with their rendition of "Before He Speaks." 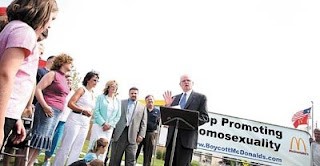 Another birthday for me but the Gospel is ageless

Today is Saturday, July 12, 2008 and I turn 57 years old. It’s a typical hot Mississippi summer day and mom tells me it was this hot in 1951 only without the luxury of air conditioning.

At 57, I have come to rest my soul on a handful of biblical truths:
Here is a video clip of Billy Graham preaching in Madison Square Garden in New York City in 1957. I hope you are reminded in this excerpt from a sermon preached 51 years ago that the Gospel is ageless.

This weekend Americans are celebrating the 232nd birthday of what arguably became the greatest and most powerful nation this planet has ever known.

232 years seems like a very long time. But, consider this: with an average life expectancy of about 78 years in America these days, that is actually just a bit less than three overlapping lifetimes. And compared to such nations as Egypt, Greece, China and others, the good-ol' USA is still the kid on the block.

Last week in this space, we discussed how New Age philosophies, like a virulent disease, are eating away at the very heart and soul of this nation. And I use the word "soul" intentionally because, as we have seen, this deadly cancer has been spreading through the church as well as secular society.

Although the hazards we face as Christians in America pale compared with the persecution our believing brothers and sisters around the world are facing -- even gruesome death -- we are definitely seeing an accelerated level of attack on fundamental Christian beliefs. (Take a moment, if possible, to re-read last week's Epistle about this.) Satan obviously knows his time is short. (Rev. 12:12.)

But I have lived long enough -- and the majority of you reading this probably have, as well -- to have seen a major change in American society regarding Christian beliefs. When I was in grade school -- public school, mind you -- the teacher would read a chapter from the Bible each morning. We would recite the Lord's prayer. And we would recite the Pledge of Allegiance. To today's school administrators all of that seems totally out of place, archaic, primitive, and certainly not something for a more "enlightened" and pluralistic society. During my years as a radio newsman, I covered many municipal government meetings that opened with prayer. Today that practice is coming under relentless attack – or, commonly, has disappeared entirely. It's just verboten.

Too bad. We have lost sight of where this nation's strength originated.

But over the past two centuries, enlightened observers have warned about what we're seeing happen now.

In 1832, a Frenchman, Alexis de Tocqueville, came to America to investigate the American penal system, but, much more broadly, to observe American society. His observations and conclusions filled two volumes. Consider these well-known observations of his:

And so it was – in 1832. But are American pulpits still "aflame with righteousness?" Consider de Tocqueville's conclusion – and warning:

"America is great because America is good, and if America ever ceases to be good, America will cease to be great."

That's a chilling warning, especially in light of the changes we've seen in as little as the past twenty years. It's not unfair to say that much of American society has lost its moral compass – or has simply decided to disregard it entirely. Our celebrities and our politicians and even some liberal theologians preach that there is nothing wrong with killing pre-born babies or in approving, celebrating and even "sanctifying" acts that God has called "abominations."

How much longer will God withhold the judgement that this nation must surely be bringing upon itself? And can we allow these celebrities, politicians and others to continually thumb their noses at God without speaking up more boldly in defense of the truth? The words of the glorified Christ to the Church at Ephesus in Revelation 2:5 could be read as a plea – and warning – for us today, as a nation as well as individually: "Think about those times of your first love (how different now!) and turn back to me again and work as you did before; or else I will come and remove your candlestick from its place among the churches."*

One of the most insightful and incisive quotes I've seen on this issue comes not from a theologian or a preacher but rather from a noted U. S. Army officer during World War II, Gen. Omar Bradley (after whom the Bradley tank is named). Read carefully what he had to say: "We have grasped the mystery of the atom and rejected the Sermon on the Mount… America today is running on the momentum of a Godly ancestry, and when that momentum runs down, God help America."

There's very little momentum left. As a society — and especially as respecting Christian influence in our society — we are experiencing entropy, which the dictionary defines as the "steady deterioration of a system or society."

Pray today as you have never before prayed for this land. Pray for spiritual revival to reverse the accelerating downward moral and spiritual trend. Pray that God's people will exercise those "unalienable rights" the Founding Fathers uniquely recognized as given "by their Creator" to take a stand for truth — now more than ever.

Pray that God's chilling words to Ezekiel (22:30) will not apply to us: "So I sought for a man among them who would...stand in the gap before Me on behalf of the land, that I should not destroy it; but I found no one."