Observations of an evangelist - by Jerry Drace

Here is a timely commentary from Evangelist Jerry Drace, Observations of an Evangelist, regarding the state of today's church. It is taken from Baptist Press - BPNews.net 10-25-06

Since February 1975 when God led me to establish the Jerry Drace Evangelistic Association He has allowed me to preach in more than 1,000 churches across our nation. In His divine providence He has placed me in the company of some of His choicest servants as well as some who seek to be served. Throughout the past 31 years I have kept notes and observations on each of the pastors, staffs and churches where my team and I have been privileged to present the claims of Christ. I am sure some of these observations will be misunderstood, others will be embraced. I wish to share only 13 in hopes they will serve as a catalyst for your own reflections:

-- I have observed the lowering of the standards of holiness from the pulpit to the pew. It appears we are seeking to develop happy churches, but not holy churches. One pastor stated that he wanted his people to leave the Sunday morning worship feeling "affirmed, approved and applauded". Whatever happened to leaving feeling confronted, convicted, confessed and cleansed? Spurgeon put it in perspective years ago when he said, "Of all the griefs the church ever feels, the keenest is when those who once stood in her midst dishonor the name of Christ by unholy living."

-- I have observed the seductive fashions of the world being worn in the worship centers of our churches. Teenage girls and sometimes their mothers wear clothes to church they neither could wear to school nor in the workplace. The same applies to the male gender. We have developed such a laxity in our attire the result has numbed the spiritual senses of being in the presence of Deity. I am fully aware that God looks on the heart, but clothing, or the lack thereof, should not distract from looking into His face.

-- I have observed more and more churches having fewer and fewer revivals. Of course, the rural church will always hold a revival, whether they actually have one or not, the third week of August. Vance Havner once said, "Preachers speak of 'holding revivals'. Somebody ought to turn one loose!" Real revival -- which takes prayer and preparation and sees scores ushered into the Kingdom and church members rekindling the fire within -- is quickly giving way to one-day events. We have stopped singing "Take Time To Be Holy," because we don't have the time.

-- I have observed more and more churches decreasing from mortification rather than increasing due to salvation. There is more life outside in most church cemeteries than inside on the pews. At least in the cemeteries the grass grows and the flowers bloom. If there is not a revival in our land many of our rural churches will become bed and breakfast inns and our larger churches will be turned into antique malls. If you don't believe this, visit Great Britain.

-- I have observed more and more churches growing by transferring letters rather than transforming lives. It doesn't take a genius to build a church numerically. Given the right staff and programs you can fill a church. However, there is an eternal difference between filling a church with people and filling the people inside the church.

-- I have observed more and more pastors and evangelists preaching someone else’s sermons rather than studying and preaching their own. The call to preach has been replaced with the desire to succeed. Being an expounder of the Word requires time alone with God. Being a mouth for God to the people of God is an awesome responsibility. Preaching someone else's anointed sermon doesn't guarantee your anointment. If the sermon isn't gathered and set ablaze in the pastor's heart it likely won't spread to the hearts of the church members. Some of the greatest proclaimers of the Good News are seldom heard because they neither pastor a mega church nor are the featured speakers on Christian cruises.

-- I have observed unethical and even immoral conduct by religious leaders with little or no remorse on their part once their deeds were made public. The graveyard of compromise is filled with those who listened to the sirens of the world. Accountability and integrity were sacrificed for personal gain and puffed-up egos. When Christian leaders become legends in their own minds the ice has already broken.

-- I have observed the policies of the community dictating the policies of the church, especially in the area of sports. We now schedule the events of the church around the athletic calendar of our schools or recreational departments. We have surrendered to the god of sports. Many of our parents allow their children to play their favorite sport on Sunday morning with the rationale, "What can we do about it?" These same parents wouldn't allow their children to skip school for a church event. We even close our churches on Sunday nights if it is a national holiday. Good thing God doesn't cancel His services.

-- I have observed more and more churches teaching the latest trends in church growth rather than the doctrines of the Scriptures. We have churches full of people who can quote from the latest church growth guru, but for the life of them they can neither recall nor defend any of the doctrines of the Bible. We can be seeker friendly and purpose driven, but if we fail to seek Christ and find our purpose in Him alone all the books, seminars and mega conferences will only impede the salvation of the lost and the disciplining of the saved.

-- I have observed us becoming a people who enjoy the expression of worship without encountering the experience of worship. No one enjoys beautiful choruses more than me, yet with the freedom of style which this has ushered into our churches we must be careful not to allow our performance to overshadow His presence. Celebration without commitment leads to worthless worship.

-- I have observed religion becoming big business. Christian recording artists are now referred to as superstars and certain pastors are touted as religious CEOs. Religious leaders have evolved from troublers of society to trend-setters in society. We have religious personalities who are known as much for their political creeds as their theological convictions. Simple statements from the Bible are marketed into multimillion dollar enterprises. An executive in a Christian publication company once told me, "It's all about the buck." You half expect to see certain religious organizations listed on the New York Stock Exchange.

-- I have observed a few proclaimers who have comprised their call because of a cowardly commitment to the truths of God's Word. This brings about a deceitful delivery of devilish doctrines. The end result is a man who panders to the people and prostitutes the proclamation in the process. When wickedness enters the doors of the church it soon spreads throughout the land without any opposition. Satan himself could not have better allies than pastors who refuse to preach the truths of the Scriptures and church members who refuse to live godly lives.

-- I have observed a righteous remnant in every church who have a hunger and thirst for experiencing God to the fullest. It is this group, both young and old, who will pass on the teachings and doctrines of Holy Scripture to the next generation. Praise God for ministers and members who are not driven by fashions and trends, but remain faithful and true to fulfilling the Great Commission.

Jerry Drace is a past president of the Conference of Southern Baptist Evangelists. In addition to revivals and area wide crusades, he and his wife, Becky, conduct Hope for the Home conferences. They live in Jackson, Tenn. More information about the Draces is available at www.jdea.tn.org and www.HopefortheHome.org.
Posted by Buddy Smith at Saturday, October 28, 2006 No comments: 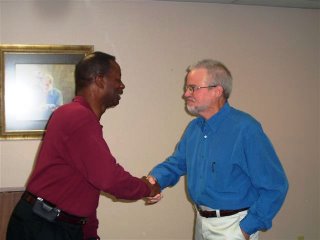 Here at AFA and AFR we have been looking forward to a visit from one of my all time favorite Chrisitan music artists, Larnelle Harris, who is here today to help us promote Pastor Appreciation Month. If you are not familiar with Larnelle, he is an amazing volalist and composer. Take a look at his many awards and accolades.

We spent the day today on AFR urging our listeners to pray daily for their pastor! Click here for a form to let us know that you are praying for your pastor. If the pastor you honored wins the prize pack they become qualified for the grand prize drawing - a cabin for two on the AFR Family Fun Cruise! Throughout this special day, they will announce the names of pastors that are being prayed for.

Tamara Durham in our office suprised me with a snapshot she took of my little visit with Larnelle following our staff devotional time where he had shared a couple of songs and words this morning. Wow! What an annointed powerful vocalist who has so faithfully carried the Lord's song all around this nation and world! Larnelle shared from his heart and God's Word in Ephesians 6 about how our pastor's are under spiritual attack and in desperate need of the prayers of God's people. It was obvious from Larnell's words that he clearly understands the all-out spiritual attack which all Christian leaders are under and God's pathway to victory.

Larnelle and I chatted for a few moments this morning and it didn't take long until the conversation turned to our grandchildren. I also took the opportunity to reminisce with him a little about his visit to Tupelo in the mid nineties when AFR sponsored his concert at the Tupelo Civic Auditorium where I directed a 50 voice back up choir for him. I will never forget the experience of sharing a time of minsitry with this incredible servant of the Kingdom.
Posted by Buddy Smith at Thursday, October 26, 2006 No comments:

My Mom & Dad on WTVA's "The Traveler"

I called my Mom and Dad, Joan and Marion Smith, on the way home from the office on Wednesday and Dad made some unusual comment about "how it must have been a slow news day." I questioned him about the comment and he told me that Tupelo's NBC television affiliate, WTVA, had come by the their house and done an interview about his backyard museum which he named Poppas Country. WTVA does a weekly segment on their Thursday editions of their newscasts where they spotlight a town in their viewing area. This was the week for my hometown of Ackerman, Missississippi, and apparently someone at City Hall sent them to see Mom and Dad.

Dad is not threatened by a TV camera and is a natural entertainer so this was a no big deal for him. On the contrary, my Mom is different story. She told me that they caught her "on the way from the butter bean patch" and put her on camera. She sounded profoundly bothered by the intrusion but hoped that she came across okay which she did.

Please take a look and listen and send my Dad and Mom a note. I'm sure that they would love to hear from you - popsmith@dtcweb.net.