I’m surprised that Carol has not submitted my weak-kneed marriage proposal to the Guinness Book of World Records as the “world’s wimpiest proposal.” I told my parents that I was planning to propose to Carol later that evening. It really came as no great surprise to them as we had been dating for about six years. My mother worked at the bank in our small town of Ackerman and by 8:01 AM the next morning all of the employees and most of the town heard news of our engagement.

But there was a problem. I had wimped out that night before on that 4-word question but either forgot or was too embarrassed to update my parents. The troubles compounded when Carol went in the bank that morning and tellers rushed over to congratulate her. Then my mom came out and asked her what she thought. My mom asked Carol if she was surprised. Carol shrugged her shoulders with a questioning look and my mom said, “He’s going to kill me.” Mom did her best and spent the entire day trying to squelch the engagement rumor mill that had spread like wildfire all over the small town. I am confident that she would never have succeeded if it had been after Al Gore invented the Internet. Somehow, about two weeks later, I finally worked up the courage to ask Carol to marry me.

As our son, Casey, heard this story repeated through the years 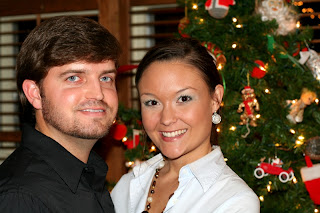 he must have thought, “Surely, I can top that!” Consequently, I have honestly thought about submitting his proposal to the Guinness Book of World Records for the category of “world’s greatest proposal.” Casey came to me with his idea of proposing to Mandy on February 19 at Winter Jam 2005, which was an area contemporary Christian music event planned for the Bancorp Center in Tupelo Mississippi. I told him that if he had the guts, I might have the contacts through my workplace at American Family Radio to help. He was convincing so I worked through my work associate, Ron Cottom, at American Family Radio to help him. Casey made contact with the group, Newsong, who was serving as host to Winter Jam 2005. At first, they seemed a little skeptical of the whole idea but indicated that they had done this sort of thing at least once. They told Casey to email them more information and they would consider it and get back in touch with him closer to the time of the event.

A few days before the event, Casey got a call from one of the road crew of Newsong who informed him that they would grant him his wish if he could rightfully answer but one question. The question was “will she say yes?” Casey was able to assure them that Mandy would say yes and the plan quickly took shape. They told him to check backstage before the concert to let them know where Mandy would be sitting. They wanted to shine a spot light on her when Casey took the stage.

So, it’s the night of Winter Jam 2005 and there are more than 6,000 people gathered at the Bancorp Arena. Mandy is frustrated because Casey tells her that he has to go to the bathroom at the very time that Rachael Lampa and the young man from Newsong is singing their favorite song, “When God Made You.” The song reaches a conclusion and you can watch the video for the rest of the story. Our daughter, Stacey, is the one doing all the exciting camera work.

I was in Reston, Virginia that Saturday morning to speak at Good Shepherd Lutheran Church on behalf of AFA. I will always be grateful to my good friends, Henry and Kathy Eickelberg, for going to all the extra expenses to get me routed back to Tupelo in time for the big proposal.

Mandy did say "yes" and they were married on December 17, 2006. They now reside in Birmingham, AL where Casey is a PGA Head Golf Professional at Farmlinks Golf Club near Sylacauga, AL. Mandy serves as Worship Director at First United Methodist Church of Columbiana, AL.
Posted by Buddy Smith at Thursday, February 15, 2007