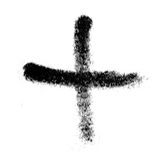 Lent begins with the imposition of ashes, an ancient symbol of penance common in the Old Testament and pagan antiquity. Jesus alludes to it when he condemns the cities of Bethsaida and Chorazin for not doing penance. “If the miracles performed in you had taken place in Trye and Sidon, they would have repented long ago in sackcloth and ashes.” (Matthew 11:21)

Today is Ash Wednesday: the first day of the penitential season of Lent. Its true name is actually not "Ash Wednesday" but "The Day of Ashes." Whichever name is used, the reference to ashes comes from the ceremony of placing ashes on the forehead in the shape of the cross as a sign of penitence. Pope Gregory I, who was Bishop of Rome from to 590 A.D. to 604 A.D, introduced this custom. The Synod of Benevento enacted it as a universal practice in all of Western Christendom in 1091 A.D.

Gardeners know that ashes can be used to help grow plants. But basically ashes are worthless. In fact they are often less than worthless - they are a hindrance and a liability. You can't make ashes pretty by painting them, and you can't make ashes smell good by spraying perfume on them. Ashes are just ashes.

And so it is with us - people are just people. When all is said and done, no matter how much righteous paint we cover ourselves with, no matter how much virtuous perfume we spray on ourselves, what we are left with are thoughts and feelings and actions that are best buried and forgotten.

So why do we bother tonight smearing ashes on our foreheads? Why do we gather and remember what we are on Ash Wednesday?

The Bible has a number of references about ashes. The first comes in Genesis 18:27. Abraham is bargaining with God to spare the cities of Sodom and Gomorrah when he suddenly realizes that he, a mere mortal, has been speaking to almighty God. He says, "I have been so bold to speak to the Lord, though I am nothing but dust and ashes." The words "dust and ashes" are used together in Job 30:19 and 42:6. The Hebrew words have the same consonant sounds. One might rightfully conclude that the word "ash" carries with it much the same theological connotation as the word "dust." Dust and ashes are also synonyms of the word "earth" (adamah). From this word we derive Adam and the Hebrew word for man. Genesis 3:19 states the words around which this service centers, "Remember that you are dust, and to dust you will return." Ecclesiastes 3:20 says, "All go to the same place; all come from dust, and to dust all return." Ashes are a symbol of our mortality. We are tied to the earth and nothing in us is immortal unless God gives it to us.

In Numbers 19:9 and 17, ashes are used in the rites of purification. Hebrews draws directly upon this symbolism in Hebrews 9: 13-14, "The blood of goats and bulls and the ashes of a heifer sprinkled on those who are ceremonially unclean sanctify them so that they are outwardly clean. How much more, then, will the blood of Christ, who through the eternal spirit offered Himself unblemished to God, cleanse our consciences from acts that lead to death, so that we may serve the living God!"

We do not believe the ashes have any power to purify us of our sin. However, their use can remind us of the cleansing power of Jesus Christ, especially when that symbol is placed upon our bodies in the form of a cross.

Carol and I grew up in Ackerman and Choctaw County, which is one of the poorest counties in Mississippi, which is one of the poorest states in America. And yet, this little county has produced some notables, including two governors (one of whom became a Judge of the U.S. Court of Appeals for the 5th Circuit) and a Miss America. I went to school and church with former Governor Ray Mabus and Carol and I were good friends with Miss America Cheryl Prewitt Salem and her family. My parents and I lived only one house down from Governor and Judge J.P. Coleman.

Mr. Gospel Music
There is another from Choctaw County who gained worldwide notoriety and in whom I had deep admiration: James B 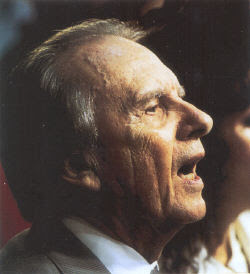 lackwood. He was a man of very small statue who had a big heart for God and for his fellow man. His life was a Spirit-led one that blazed a trail for Jesus Christ around the globe singing and proclaiming the good news of Jesus Christ.

Nine times Grammy Award winner, James W. Blackwood, Sr. died on Sunday, February 3, 2002. Born August 4, 1919, he was 82. James Blackwood was the last member of the world renowned Blackwood Brothers Quartet. James Blackwood has been nominated for the prestigious Grammy Award thirty-one different years. The Gospel Music Association has presented Mr. Blackwood with its highest recognition, The Dove Award, seven times for being the top male vocalist in his field. James Blackwood was an intense man of faith who was most honored when the Assemblies of God bestowed upon him their highest recognition of achievement, "The General Superintendent's Medal of Honor" in 2001.

The music of James Blackwood and The Blackwood Brothers has entertained and inspired an impressive list of personalities who have shaped Americana, including former American Presidents, and Elvis Presley. The late Presley, who always referred to James respectfully as "Mr. Blackwood," was very outspoken regarding his admiration for the Blackwood family. James and his quartet sang at both funeral services for Elvis Presley, and Presley's mother. The current Attorney General of the United States, The Honorable John Ashcroft, is among the enormous list of devoted friend and admirers of James Blackwood.

The Story of James W Blackwood, Sr. is a true American tale of triumph over hardship. In 1934, James, along with his brothers Doyle and Roy, and nephew R.W. Blackwood, Sr. founded The Blackwood Brothers. Having once been Mississippi sharecroppers, the four men refused to let such humble beginnings hinder their passion for music. In 1954, the group became the first to ever present gospel music to the masses on network television with an unforgettable appearance on the CBS program, "The Arthur Godfrey Talent Scouts."

others Quartet was in Choctaw County during the mid 1950's when I was just a lad. J.P. Coleman was campaigning for governor and held a rally on the football field in Ackerman. Even recollections of this event leaves my mouth watering for more southern fried chicken and my soul thirsting for another Spirited verse of four-part harmony from The Blackwood Brothers.

The Blackwood Brothers Quartet defined a musical style that would become the basis for Southern gospel music that is loved all around the world. Perhaps more importantly, they lived the Christian life and therefore set a righteous standard for those musicians who would follow in the field of Southern gospel music. Their love for God, family and country combined with their unique harmonies remains unparalleled in my opinion.

My Christian life and ministry have been profoundly impacted through the Blackwood family. James' sister, Lena Cain, taught me much about the deeper life in the Spirit. His niece, Madeline Wood, was my choral director and voice instructor at church and school during the formative years. Her love for Jesus is the contagious type and her gift of music is God-breathed. Madeline and her family are in the "cherished friends" category to my family and me.

I wanted to attend the funeral of James Blackwood but couldn't because of obligations that day. Madeline did attend his funeral and shared with me some comments that James' pastor made in his eulogy. He spoke of James' song - I Want To Be More Like Jesus Everyday - and said "we could all be more like Jesus by being more like James Blackwood." Madeline said to me, "I hope that can be said of me someday." I can already confirm God's answer to Madeline's prayer because of her ministry to many. And isn't that a wonderful thought and a worthy prayer for us? That someday it would be said of us on the Tremont Charge that someone was more like Jesus because they knew you and me?

My friend, the late Dr. Tom Carruth once asked me, "When people see you and know you, do they believe God is love?" That is an excellent examination question for our Ash Wednesday, Lenten and Easter preparation.

Our calling as believers for Ash Wednesday, Lent and throughout the year is to make Him known. There are many in our circles of influence who don’t know God or where to find Him. It reminds me of a story about a couple who had two sons, ages 8 and 10, who were very mischievous. These two were always getting into trouble and their parents knew that if any misconduct occurred in their town, their boys were probably involved. The boys' mother heard that a clergyman in town had been successful in dealing with children, so she asked if he would speak with her boys. The clergyman agreed, but asked to see them each individually. So the mother sent her 8-year-old first, in the morning, with the older boy to see the clergyman in the afternoon.

The clergyman, a huge man with a booming voice, sat the younger boy down and asked him sternly, "Where is God?". The boy's mouth dropped open, but he made no response. He just sat there with his mouth hanging open, staring wide-eyed at the imposing figure of the pastor. So the clergyman repeated the question in an even sterner tone, "Where is God!!?" Again the boy made no attempt to answer. So the clergyman raised his voice even more and shook his finger in the boy's face and bellowed, "WHERE IS GOD!?"

The boy screamed and bolted from the room, ran directly home and dove into his closet, slamming the door behind him. When his older brother found him in the closet, he asked, "What happened?" The younger brother, gasping for breath, replied, "We're in BIG trouble this time. God is missing - and they think WE did it!"

It is when we sense that God is missing in someone’s life that we should do all we can to share what God has done for us in and through Jesus Christ.
Posted by Buddy Smith at Tuesday, February 20, 2007