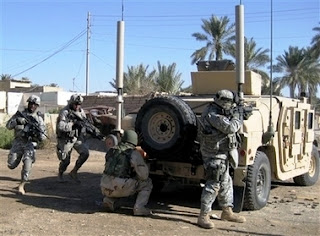 Here is the latest news from AFA employee Rick Ochoa in Baqubah, Iraq. That is Rick with his gun aimed in the photo at the right rear of the Humvee.

Merry Christmas from Iraq! Well you never know what’s going to happen when you go out on a mission! Last Saturday we went to a neighborhood and after searching it, we passed out candy and school supplies to the little kids. Yesterday we got into a hell of a firefight that lasted for almost two hours resulting in 5-6 bad guys killed!

We went out for a supposedly easy search mission in a different neighborhood. As we were traveling to the objective we took some moderately heavy sniper fire and pushed through that. Upon arriving at the objective we found it deserted. We dismounted some of our guys in order to begin the search. But within a few minutes we were taking well aimed coordinated fire from three sides. Then an RPG hit one of the Iraqi vehicles behind me in the muffler (no damage). Next a mortar round (the first of 5-6) hit about 40 yards in front of me. By now machinegun fire from directly down the street was pouring in.

The decision was quickly made to take a nearby three story building for the high ground advantage. The four of us who had dismounted moved into the building on our left while our two vehicles were putting out suppressive fire down the street and to our right. Once we were in the building CPTs Holditch and McEwen went up to the roof with Doc Curry. They began calling in artillery and helicopters to take out the mortars shooting at us. Meanwhile I was directing the Iraqi soldiers on the 1st and second floor to keep up effective suppressive fire from the windows and back terrace. About then one of the Iraqi soldiers got hit in the arm but after Doc dressed his wound he picked up his weapon and got back in the fight.

In the confusion of the fight the Iraqi commander ordered his vehicles to pull back and that left the four of us in the building with a squad of Jundis (Iraqi soldiers). Back down on the street our two vehicles were disabled by small arms fire to the radiators and oil lines. (There were 46 bullet holes in one alone.) Our position was untenable until we could get reinforced or get helicopters on station. So the decision was made to exfiltrate the building. We then had to make a mad dash out of the building and back up the street to our downed vehicles with the wounded Iraqi soldier. The vehicles couldn't come to us so we had to go to them. (It was a good sixty yard dash under fire.) Meanwhile the gun trucks though disabled continued to pour fire at our attackers killing several.

Finally the Helicopters arrived on scene and so did Coalition reinforcements with some Bradley Fighting Vehicles and we finished off the enemy, secured the neighborhood and searched it completing our mission. A large weapons cache was found in the vicinity as well as several dead bodies. Several other Iraqi soldiers got wounded including one who ran out of the building to get an RPG and was shot as he was returning to help us.

During all of this time two of my teammates were wounded slightly by shrapnel from bullet ricochets. SFC Kennedy got cut on his hand from a bullet that hit his .50 CAL machinegun and CPT Holditch took a slight wound in his forearm from a bullet fragment ricocheting off the wall. Somehow I sprained my ankle (not badly). The fight lasted almost two hours... but in the end we killed 5 or 6 of the bad guys! So I guess my angels were working overtime today! Please continue to pray for Team Alamo

As we celebrate Christmas in America this year, please take a moment to send Rick Ochoa an encouraging email and be sure to lift him and his team up in prayer. My prayer is that we will flood his e-mail this Christmas and New years with and outpouring of our love and support from the home front. His e-mail address is rick.c.ochoa@us.army.mil
Posted by Buddy Smith at Thursday, December 21, 2006

Thank you soldier, For giving up your holiday to keep us safe. My son is over in warhorse..I pray for you ALL everyday..God Speed back into your loved ones arms.
oooo:) An Army Mom