News From Rick Ochoa - "Doing Some Good in Baqubah, Iraq" 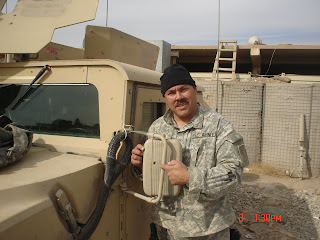 Yesterday we went on a pretty good mission. We did some good and at the bottom of this page you can read the news release. You probablly don't get to hear this kind of stuff on CNN but believe me there are some good things happening! Unfortunately I lost my mirror to a stray shot, (see the attached photo) but all of Team Alamo is safe and sound. Thanks for your prayers! Rick Ochoa

During the operation, soldiers from the 2nd Brigade, 5th Iraqi Army, with support from the 1-12 Combined Arms Battalion, 3rd Brigade Combat Team, 1st Cavalry Division, searched 124 houses, detained 44 suspected terrorists, discovered three IEDs, killed three anti-Iraqi forces and freed one kidnapping victim who had been kidnapped 25 days ago and was being held for ransom.

“This operation is a significant event for the people of Baqubah,” said Col. David W. Sutherland, 3rd Brigade Combat Team, 1st Cavalry Division, commander and senior U.S. Army officer in the Diyala province. “Because of their efforts, the Iraqi Security Forces were able to target specific suspects responsible for disrupting the peace of every day life in Baqubah. This is a vital step toward allowing the Iraqi forces to uphold the rule of law throughout the province,” he said.

The detainees were transferred to Forward Operating Base Gabe, and the IEDs were control detonated by an explosive ordinance disposal unit.

During the operation, two Iraqi Army soldiers were wounded. The soldiers were medically evacuated to FOB Warhorse, and one of the two soldiers was then evacuated by air to Logistics Support Area Anaconda for further treatment. Both are in stable condition.

While conducting the mission, soldiers from 2/5 IA spoke to the town’s citizens about the importance of their security and stability, while other soldiers delivered blankets and other humanitarian supplies to homes throughout Baqubah.

“Through their actions today, it is clear that the Iraqi Security Forces are focused on helping maintain security and stability for the people of Baqubah and the Diyala province,” Sutherland said.

Rick Ochoa sent a video clip of his promotion ceremony done in conjunction with the Iraqi soldiers he works with.
Posted by Buddy Smith at Monday, December 04, 2006