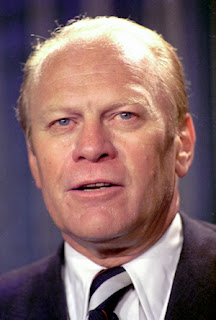 Gerald R. Ford on May 28, 1977, four months after leaving the presidency, gave the commencement address to his son and 180 other Gordon-Conwell Theological Seminary graduates. Here are excerpts:

Today I speak not as an office-holder but as a father and private citizen. From this perspective it's easy enough to see how fleeting things of the world are which we consider important. A man can hold high office, command great powers, and be hailed as the leader of the world, but when his time in office is over he must be prepared mentally, emotionally, spiritually, to relinquish the power, the prestige, and the public acclaim that came with the office. He must retain the quiet confidence that he has been the same man all along and that whatever he contributed as president he can still contribute in other ways.

This is not an easy transition to make, but with the help of one's family and one's friends and with the conviction that God works his own purposes in each of our own lives, it is easier to see that leaving the White House is not the end of the world but simply the beginning of a new chapter in one's life....

More than a century ago, Abraham Lincoln told the story of an Eastern monarch who instructed his wise men to write a sentence to be always in view which would be true and appropriate in all circumstances and in all times. They presented him these words: "And this, too, shall pass away." Lincoln marveled at this very simple wisdom, how much it expresses, how chastening in the hour of pride, how consoling in the depths of affliction.

Jesus took this thought an important step further. "The things of this earth shall pass away," he said, "but my word shall not pass away." This is the most comforting thought of all, especially, for those in this audience who have dedicated their lives to spreading the Word of God through preaching, teaching, and the ministry of service. You have learned by now that God's commandments are not just sterile laws to be repeated in church. They constitute a strong code of morality and conduct by which you can lead successfully constructive lives of compassion and of service. They also represent an agenda for social action in dealing with the problems of this world. You have committed yourselves to do battle with the enemies of this globe—ignorance, disease, poverty, injustice, greed, and war itself—even while building your hopes on things eternal and setting your sights on the gates of heaven. In this commitment, we have much in common.

For almost thirty years I committed my life to public service, to advancing peace among nations, and to social and economic progress among our own people. President Kennedy once reported a survey which revealed that every mother wanted her son to grow up to become president but none of them wanted him to get into politics to do it. It's a hard life. So many are the political compromises one is obliged to make that moral compromise becomes a constant danger, but I found during my time in the White House that in many important ways my Christian faith was strengthened rather than weakened.

When I became president on August 9, 1974, this country was faced with some of its most serious and dangerous problems in its entire history. America had been buffeted about for more than a decade with shocks to its system that would have paralyzed a lesser nation: political assassinations, a long and frustrating war, riots in our streets and on our campuses, economic distress, and scandals at the highest level of government. Underlying these problems was a crisis of confidence, a crisis of the spirit among our people. Above all, I knew in this time of crisis I was about to enter the most powerful office in the world, an office I had never sought, without having an election mandate from the American people. I did not fear the new responsibilities, but neither did I dare to believe that I could carry the load alone by myself.

In the few hours before the presidency was suddenly thrust upon me, one of my aides asked what verse I wanted the Bible opened to when I took the oath of office. I turned to the Bible which Mike had given me when I became vice-president, and opened it to the Book of Proverbs. Ever since I was a little boy I have used a very special verse from Proverbs as a kind of personal prayer. On that August morning nearly three years ago that verse took on a new significance in my life. It says: "Trust in the Lord with all thine heart, and lean not unto thine own understanding: in all thy ways acknowledge him, and he shall direct thy paths." That was the verse I placed my hand on when I took the oath of office as president. It was the same verse I would turn to more than two years later on a Wednesday morning in November, the day after the election.

If the experience of the presidency itself led me to a greater reliance upon God, a greater appreciation of my religion, so did some of the critical events of those two and a half years in the White House. I remember particularly well when in September of 1974, just a few weeks after I had taken office, Betty had her bout with cancer. It was during that time that we came to a much deeper understanding of our personal relationship with Jesus Christ. At a time when human weakness and human frailty was such a real part of our lives, we were able to see clearly for the first time what the Apostle Paul meant when he wrote that Christ's strength is made perfect in our weakness. Having been through that experience, we found that we were better able to give comfort and hope to others in their time of pain.

The White House—those years—also taught us a dramatic lesson in the mortality of man. Twice I escaped an assassin's bullet, and twice I came to understand in vivid terms another message of Paul, that we should trust not in ourselves but in God, who delivered us from death and preserves us still.

Finally, the presidency taught me how limited is the wisdom of man. The great issues of our time are so complex they sometimes seem to defy solution. I made my share of mistakes in trying to deal with these controversial and complex problems, but the achievements of the administration—from limiting the weapons of nuclear war to restoring harmony and confidence in our own country—all had their roots in a policy so simply and yet so wisely proclaimed two thousand years ago: "Thou shalt love thy neighbor as thyself."

This speech was reprinted in the July 29, 1977, issue of Christianity Today.

Here is an interesting commentary from Time.com -- The Other Born-Again President?
Posted by Buddy Smith at Tuesday, January 02, 2007