The Tears of our President 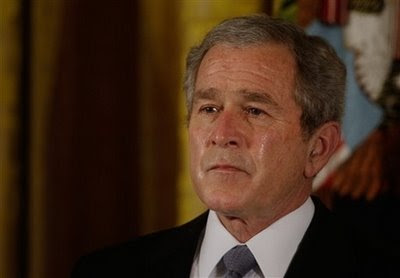 Navy SEAL Michael A. Monsoor had fast thinking to do when a live grenade came out of nowhere to bounce off his chest: Take the clear path to safety that he had but his comrades didn't, try to toss it safely away, or throw himself on top of it.

With barely an instant's hesitation on that Iraqi rooftop, Monsoor took the last course, sacrificing his life to save the men around him. For that, President Bush on Tuesday awarded him the Medal of Honor.

In an East Room ceremony, Bush presented the nation's highest military honor to Monsoor's still-grieving parents, Sally and George Monsoor. About 250 guests, including his sister and two brothers, fellow SEALS, other Medal winners, many friends and GOP Sen. John McCain and other members of Congress, looked on quietly.

"The Medal of Honor is awarded for an act of such courage that no one could rightly be expected to undertake it," Bush said. "Yet those who knew Michael Monsoor were not surprised when he did."

Bush has awarded the medals to 10 people during his presidency. Monsoor is only the third from the Iraq war, and Bush's lip trembled and tears streamed down his cheeks as the official citation was read with the details of his bravery.

The emotional proceedings at the White House came as the top U.S. general and diplomat in Iraq opened two days of testimony across town on Capitol Hill on the status of the war, which has killed more than 4,020 U.S. military personnel.

Gen. David Petraeus said security in Iraq is still too fragile to allow announcements of troop levels going below 140,000 before September. Bush is giving a speech on Thursday to announce whether he accepts Petraeus' recommendation to suspend troop withdrawals for 45 days after the current round completes in July. He is expected to do so.

Monsoor became a Navy SEAL, the military's most elite fighting force, in 2004.

"His teammates liked to laugh about the way his shiny Corvette would leave everybody in the dust," Bush said. "But deep down, they always knew Mike would never leave anybody behind when it counted."

By spring 2006, Monsoor was deployed to Ramadi in Iraq's dangerous, then-al-Qaida dominated Anbar Province, as an automatic weapons gunner and communications operator — a double assignment that often landed him more than 100 pounds of gear to carry in the hot desert.

In May, Monsoor ran through heavy enemy fire to pull a wounded SEAL to safety. He earned a Silver Star, the third-highest award for combat valor, for that action.

It was only four months later, on Sept. 29, 2006, that Monsoor and his two American teammates, plus members of the Iraqi Army, were on a rooftop in a Ramadi residential area known as a stronghold for the Sunni insurgency. They were providing early warning and sniper cover for a mission aimed at trying to clear the neighborhood.

After a long day of back-and-forth engagement and evidence that the enemy was closing them off, Monsoor and the two other SEALS moved to a confined outcropping of the roof for a better lookout position. An unseen insurgent lobbed a grenade, which hit Monsoor in the chest and landed on the floor in front of him. He yelled a warning, but quickly saw that his fellow SEALS, not positioned near the exit like he was, wouldn't be able to get clear in time. Monsoor fell onto the grenade just as it exploded, absorbing the blast with his body and dying from the injuries about 30 minutes later. Others suffered shrapnel wounds, but no one else was killed.

The Garden Grove, Calif., native, was only 25 years old.

"Mr. and Mrs. Monsoor: America owes you a debt that can never be repaid," Bush said. "This nation will always cherish the memory of your son."
Posted by Buddy Smith at Wednesday, April 09, 2008