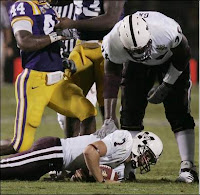 Here is a story about teamwork and perseverance from a struggling college football team. The story from the the Clarion Ledger - Picking Up Pieces - has great application to the Christian life.

That much is common.

But once Croom finished, senior defensive end Titus Brown stood up. That isn't so customary.

"I've known things around here in the past and I didn't want us to revert back to that," Brown said. "So just to be on the safe side, that's why I said some stuff."

The 'stuff', which he remembered Monday as he walked to MSU's practice fields, went something like this:

"I was, like, basically saying if we're going to be a team, there will not be any finger-pointing," he said. "Quarterback and cornerback are the only positions that the whole world can see your flaws, your mess-ups. Defensive line, you miss a slant here, miss a slant there, miss a tackle here, nobody's going to say anything. But a quarterback throws an interception, everybody can see that. I basically said whoever was perfect could judge someone. Which we know we're not perfect, so therefore, nobody says anything."

Mississippi State reconvened on the practice fields Monday afternoon after taking off the weekend that followed Thursday night's thumping. The 90-minute workout in shorts and no shoulder pads was customary for a typical game week Monday.

After all, there's little looking back being done around here now. Tulane, a team that didn't play last week and has a new coach with a new system, awaits Saturday.

Confidence, it seems, is the concern of the moment. Croom said he brought up the cliched 24-hour rule to the team in his remarks to them immediately after the game. Twenty-four hours to celebrate; twenty-four hours to lick the wounds.

"It was the first thing that going into the ballgame - we talked about this going back in the summer, we were going to play one game at a time, win lose or draw," Croom said.

many wounds to lick, but Croom pointed out positives when he talked after the game. Essentially, he made sure his team didn't have any thoughts about losing its confidence.

"We can't have that," Croom said. "That cannot happen. The other thing you've got to guard about is any kind of split between the team. And I reminded them that we have gone through."

But confidence is the biggest concern at one position, quarterback, and one specific player, Michael Henig.

His struggles - underscored by a school record-tying six interceptions - were well-documented and have led some fans to openly wonder if he's the right guy to be the team's starter.

Henig said he's still confident. He's received encouraging text messages over the weekend, including one from Archie Manning that read: "From me, Peyton and Eli, keep your head up."

He also received another decidedly less encouraging message on his MySpace profile. Henig looked at the profile of the person who sent it, saw that he was a new father, and said he responded as such: "Sir, I hope God blesses your son that if he's ever in this situation, I hope that people don't say that to him."

But Thursday night, Brown wanted to make sure his team still had faith in Henig when they left the locker room. Besides, Brown sees too many positives that could all go to waste if the players gave up now.

"The score reflected that we lost," Brown said, "but we got some questions answered about a bunch of guys."
Posted by Buddy Smith at Wednesday, September 05, 2007